I am sixty-one and a half years of age, and each day of my existence, I have been a proud American.

At the age of twelve, I stood beside my mother holding a sign proclaiming peace and love when the nuns ridiculed my long-haired brother.

In 1970, I helped my mother affix a home-made bumper-sticker to her car which read, "Viet Nam, Laos, Cambodia:  But I have FOUR sons."

That same year, I walked the streets of St. Louis with hundreds of others to raise money for impoverished Americans in Appalachia.  In the summer, I slept on a mattress on the immaculately clean floor of a couple's home on the black side of Haiti, Missouri.  Their neighborhood had unpaved streets, no electricity, and no running water.  In the morning, with several of my contemporaries and two social workers, we took our hosts to breakfast in town.  The waitress told us that we were welcome but not our black companions, including one of the social workers, a man whose father had been killed by Idi Amin's soldiers.

We stood our ground until the sheriff came and told the lady, in a tone which belied the courage of his convictions, that she had to let us sit.  All of us.  I still recall the taste of the eggs in my mouth and the victory in our hearts.

I have seen progress and my pride in our nation swelled each time a law passed or was struck down, and civil liberties grew a little more sure, a little more certain.  Today I fly a rainbow flag which my son helped me raise after the killings in Orlando.  I live beside a gay married couple, together eleven years and legally married for one, since the Supreme Court acknowledged their right to love whom they please.  Across the street in an ivy-covered brick house, two women have lived together longer than the combined years of my three marriages.  Two doors down, another gay man has bought a run-down house and improved it so much that the entire block has increased in value.

To the north of me, a family from India occupies a lovely little bungalow.  The grandfather walks  past my house most days, slim and slow.  He nods when he sees me, or lifts a hand.  If I leave for work at just the right time, I see the mother standing in her colorful traditional garb, with her son in his school uniform waiting for the bus.  At the corner of 59th, a man and his mother cook their native food at Chai-Shai, where the pakora melts in your mouth and the masala chai warms your soul.

This morning, I amended the sign that I displayed in my window a few days ago.  It had proclaimed that my home welcomed all:  Gay, Straight, Trans, Gender-Fluid, Black, White, Muslim, Jew.  A sign displaying a safety pin proclaimed YOU ARE SAFE WITH ME.  I STAND WITH YOU.

Now I have added an affirmation that IMMIGRANTS BUILT THIS NATION.  I have affirmed that WE DO NOT SUPPORT THE BAN ON IMMIGRATION.

I remain proud to be an American.  The executive orders being signed in Washington do not reflect the American values which I learned so very long ago, in my mother's home in Jennings, Missouri, where all were welcome and any food we had would be divided a little further if another hungry child sought refuge at our table.

My mother's grandfather resisted conscription in the Austrian army in defiance of the call to join the Austro-Hungary war.  He shot off his trigger finger in protest, and came to America to live in a land where freedom rang.  Several years later, he brought his wife and children, including my grandmother, to find happiness in his adopted homeland.  They worked hard, toiled long hours, had thirteen children, and wove themselves into the fiber of this nation.

Their oldest daughter, Johanna, married a Syrian boy whose family had also come to Illinois to have a new life in the land of opportunity.  Delmar Lyons, my grandfather, was born into an immigrant family whose surname in old Lebanon had been "Assad", which means "lion".  Johanna Ulz and Delmar Lyons had three daughters, their eldest being my mother Lucille Johanna Lyons Corley. Johanna's blond Austrian complexion yielded to Delmar's olive skin to produce the loveliest young ladies in all of Gillespie.  Both heritages show in my siblings and me:  A few tow-heads, some pale Irish skin from my father, blue eyes and brown, a couple of hook-beaked noses.   Our blended heritage marches across our faces in  a lively tribute to the American melting pot.

Believe me when I tell you that I feel nothing but shame for our nation on the heels of Trump's order to halt immigration.  But I straighten my shoulders and hold my head high reading news of the young lawyers who sat cross-legged on the floor at the airports of our biggest cities, writing the briefs which would land on the desk of a judge brave enough to stop this madness, at least in part, at least for now.

Trump's order does not reflect the greatness of America.  We do not reject entire groups of immigrants based upon country or religion.  We do not condemn entire classes of people as unworthy of inclusion.  We left that deplorable attitude beside the rocky way towards equality, along the avenues where we marched for justice, at the bench in courtrooms of small towns and big cities.  In America, you are not to be judged by the color of your skin but the content of your character.  If my brother kills, I do not go to jail.  If another person of Irish-Austrian-Lebanese descent sprays the crowd with bullets in a crowded courtyard, my freedom cannot be curtailed just because of our shared heritage.

Trump does not speak for America.  But his power will drag all of us into the muck of his small-minded, bigoted, terrible  reality if we do not stop him.  After only one week in office, he has angered nations, belittled desperate refugees, built a coalition of men who share his divisive mindset, and threatened to destroy the lovely tapestry of a united and inclusive America which two and a half centuries of progress has created.

I can almost understand voting for Trump, if you felt desperate and abandoned, if the slow steady rise in our economy had not been swift enough or great enough to pull you from the recession.  I can see buying into his message of economic change, even though he had no policies to create anything quicker, or surer, or better than the careful reconstruction of the eight years just ended.  If you remained unemployed, if you did not understand the newness of the world around you, I can almost see that Trump's flashy rhetoric might appeal to you.

But now:  I cannot comprehend how anyone can still back this man, as he tears away at everything for which this nation has always stood, since the fateful day when we threw tea in the Boston Harbor and declared that the King would not control us.

Another man who would be king strives to turn our republic into his fiefdom.  We cannot let him.  We must stand with our brothers and sisters of all colors, all nationalities, all religions, and all sexual orientations.  This is America.  This is who we are.  We do not turn our backs on those in need, on refugees, on those living in poverty and fleeing persecution.  We open our gates and let them take comfort on our shores.  That is the greatness of America.

I say this to those who feel threatened by these terrible events:

I stand with you.  You are safe with me.

Dark times threaten the sanctity of our Republic.  We must resist.  Our future, our freedom, depends on the choices we make in this moment. We can rise together and remain the America that our founders envisioned, or we can fall with this little man who sees only the base interests of himself and those who huddle around him.  The choice is ours.  Let us make that choice with wisdom, compassion, and honor.  Let us not abandon the values which have made this nation great. 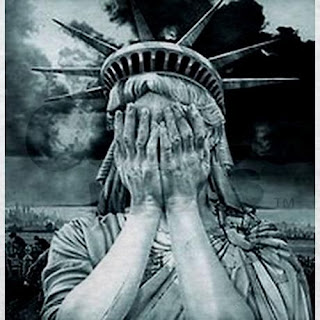 My Real Blog Sites: Currently being restored by the Tech-gods at Qwk.net!

M. Corinne Corley
I've been many things in my life: A child, a daughter, a friend; a wife, a mother, a lawyer and a pet-owner. I've given my best to many things and my worst to a few. I live in Brookside, in an airplane bungalow. I'm an eternal optimist and a sometime-poet. If I ever got a poem published in The New Yorker, I would die a happy woman. I'm a proud supporter of the Arts in Kansas City. I vote Democrat, fly the American flag, cry at Hallmark commercials, and recycle.